About six weeks ago, I wrote a post about the dire situation of the Russian economy. The conclusion was that if the Russian government continued their projected spending on the Armed Forces with the current economic situation, it could very well be the last feast in Rome before the barbarians arrived. Two days (10/12) ago, Dimitri Medvedev held a speech on the economy which thus calls for an update of the situation (for Swedish readers, browse Kalle Kn’s twitter feed for commentary)

The single most important factor for the Russian economy is the oil price. To maintain Russia’s expenditure before the crisis, I saw calculations that they needed a price around $117/barrel and their public budget is based on the more modest price of $100/barrel. This morning, crude Brent dipped below $60 and the OPEC summit showed no signs of hindering this downfall. This can be compared to around $80/barrel when I wrote the last post six weeks ago.

This strongly effects the strength of the rouble. Against the dollar, it has lost around 50% of its strength from the outset of crisis and gone from 45/$ to 66/$ during the last weeks (see below). This will increase the price of products fully or partly bought from abroad since imports a lot more expensive. This will in turn… 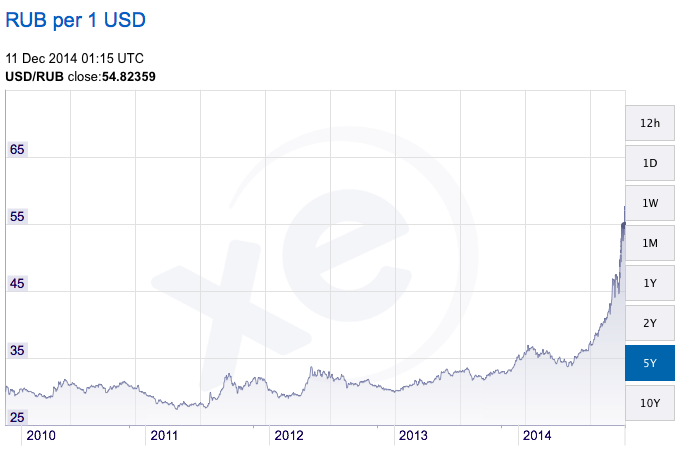 …drive up the Russian inflation, decreasing the buying power from the rouble, which in turn would drive up the prices in the stores. In this way, the inflation has increased almost by 1% the last six weeks and is in total up almost 3% since the beginning of the year. It further significantly decreases Russia’s and Russian banks’ ability to pay off foreign debt; something of which they have a lot.

This decreases the functioning of the market. A good way to gauge the market perception of the Russian economy is to look at the yields for government bonds. These are, perhaps, pointing the darkest picture. At the moment of writing, the market has less confidence for Russia than under the economic crisis when the Russian GDP shrank significantly. 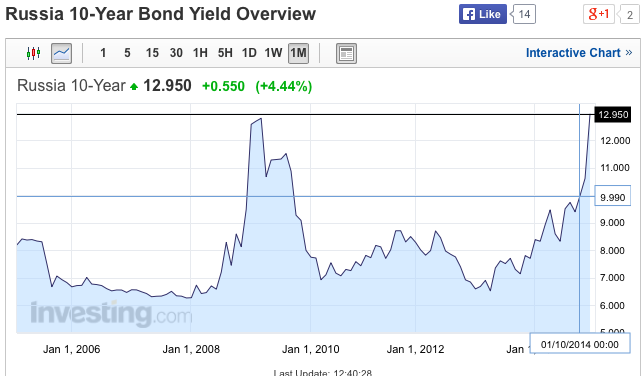 Adding to this is the problems of capital flight and all the cash that the Russian government has spent in order to stabilise the rouble. What I argued in the last piece, of which I get support from Anders Åslund, is that an economy does not descend in a linear way. The current prognosis say that Russia’s wealth fund, currency and gold reserves will keep it liquid for a bit less than two years.

That conclusion is only valid if you consider a worsening of the same rate as today. Since markets are to the largest extent about perception, the worsening would be exponential. If Russia runs out of cash, they loose the ability to control a whole range of factor that can spiral. This makes me want to flag for the opportunity of a economic crisis in Russia before that.

Thus, the Russian economy comes out from the health check with all indicators pointing towards a worsening of the decease. What are the potential security political consequences of that? Well, I’d say the short answer would be, given that the increased funding for the armed forces, the quote “to a hammer, everything can appear as a nail” applies. And the armed forces are one of the very few hammers Rusai have.

9 thoughts on “The Russian Economy: Worse and Worse”

What do you think? Cancel reply

View all posts by Oscar Jonsson