Yet again I hear the slow build up of the cello, only to take me down again with its long and melodious strokes. I’m listening to the track Denmark by Portland Cello Project, which sits first on my appropriately entitled playlist ‘Work Music’ (do go ahead and try it). It represents the familiar call to concentration and writing. Over the years of my PhD, I must have heard it several hundred times for thousand of hours. It has been somewhat comforting to fall back on these familiar tunes for inspiration when trying to turn scattered thoughts into coherent text.

The professor that headed my MA-programme repeatedly said:

Do not do a PhD, it’s one of the most stupid things one can do.

Since he was a professor and an academic, I always took it as something said half in jest and half to scare off the faint hearted. However, when I saw him at a wine reception nine months into my own PhD, I had to ask him:

That thing you said about not doing a PhD, did you say it to discourage the undetermined or do you actually think it’s a horrible idea?

Oh no, it’s a horrible idea. Doing a PhD, you’re all alone with your work, there are no clear milestones that you get over. If you do an MA, you work very hard for a couple of months, but then you do it together with others and you can always put the exam or essay behind you. In a PhD, you’re alone in the dark for years. It’s particularly bad if you’re in your later years, if you are in your early ones you can at least drop it and say you got a better offer.

Had I not been comfortable in my chosen track, I would probably have been discouraged here, but I did not want to let him get away with it. I pushed back:

But, what about you? Do you regret doing a PhD?

He thought for a while, and in the end answered:

No, I did enjoy spending four years in London on a good stipend, visiting the Royal Opera House, the theaters and the bars.

Rideau. That will bring me to my first encouragement for prospective PhD-students. Make sure you get funding. I started my PhD about a week after my MA programme, but a couple of months before the grading was done. So competing for PhD-grants without having the previous degree completed was tough. I decided to take a gamble and finance the first year on loans and, in a worst case scenario, work concurrently thereafter. Spending 30% of your time just applying for grants – oh, the paperwork – is quite demotivating. I would consider waiting a year to do the PhD or applying to a less prestigious institution if it offers funding.

The conversation with my professor captures both the beauty and the beast of taking on a PhD. On the one hand, you’re perfectly alone with your research project and it can – nay, should – be immensely rewarding. If you do not feel that way, don’t do it. Save yourself the money and the pain! Seriously, do not do it if you do not want to spend a half decade (and potentially the rest of your career) on that topic. The worst reason for doing a PhD is because you feel the labour market is bad. It’s not all glitz and glamour with a PhD either, and it takes you half a decade. 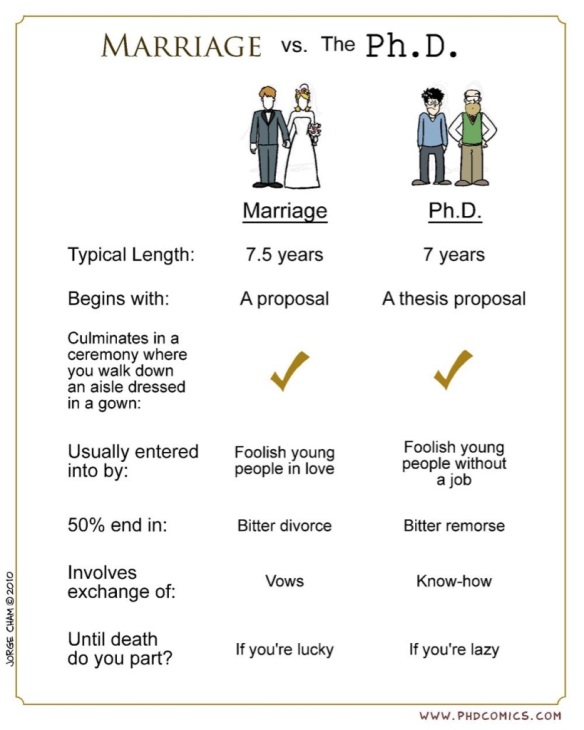 It is an immense privilege seldom matched in one’s career to dedicate all your time to a single pursuit. Later in academia, you’ll be in all kinds of soul-wrenching departmental boards and committees, teaching several courses, applying for research money and, occasionally, writing. In the real world, you’ll have at least fifty-eleven things going on at once. And yes, you are allowed to oppose the real world with academia. In academia, the real world and academia are the same. In the real world, they are not.

On the other hand, no matter how close you cooperate with people, you are alone with your project for years. You own all the problems, all thelack of progress and all the hurdles. One of the hardest things is to moderate the muscle of self-criticism. In order to produce groundbreaking research (which is kind of the criteria for a PhD), you need to be really good on self-criticism. However, the more you use the muscle, the stronger it gets. Before you know it, you see drastic faults in everything you write, even if its top-quality. Somehow you need to learn how to be content with your work and strive for high-quality. Do I sound dramatic? Psychological illness afflicts around 50% of social science PhD candidates, which beats most other professions. PhD candidates are six times more likely to suffer anxiety and depression.

My second encouragement is to get yourself a good team. Even though you are alone with your hurdles, you can be alone together with others in the same situation. In my first one and a half years, we had a solid group at King’s PhD-office and we took our coffees, lunches and pints together as often as we could (a shoutout to you guys). We helped each other with words of encouragement, practised writing and speaking, commented on each other’s papers, and tried to fill the void left by absent supervisors. Thus comes my third encouragement, get yourself a supervisor invested in your project. I was lucky to have an enthusiastic supervisor, but many of my colleagues were not, and that, in itself, is a drain.

The support team was not only helpful, but at times critical. This became obvious for me when I moved to Sweden and started working for the Swedish Armed Forces’ Headquarters while continuing my PhD part-time. All of a sudden, the group discussions and encouragement was gone and my main focus was my day job. Before accepting the offer at the HQ, I asked another PhD-colleague how it was to work while doing a PhD. She thought for a while and then looked me in the eyes and stated:

It is not the worst decision I’ve made in my life, but it is definitely top three.

I want to echo her sentiment. Alongside all the ordinary struggles of a PhD, you now have to fit it in with a (demanding) day-job. This means the bulk of the work comes on weekends, Christmas and summer vacations; times when I’m sure at least some of you can think of other things to do. Hence the fourth encouragement, don’t do a PhD when working full-time. The reassuring note here, however, is that my colleague completed her PhD while working at a great UK think-tank and I came out at the other end too.

Half a decade later.

Moving on to the fun part. After your coursework is done, you are free. You are free to use your creativity to make your mark on your topic, and this is not limited to academia. One of the things that helped me the most throughout my career is that I started writing. I started writing on my own blog, in newspapers, in magazines and for think-tanks. And (at least some) people liked what I wrote. I started to get invited to give talks, to conferences and round-tables.

Thereafter, I started meeting people and getting involved in projects, and all of a sudden I had what would in bizniz-speak be called “a network”. I built relationships with journalists, who now know they can call me for a comment on my topic (Russian warfare for those still wondering) as well as with editors, who I can contact if I want to write.

So my fifth encouragement is simply to create. This could perhaps be read as criticism of academia, but it doesn’t matter how good what you have to say is if you can’t get anyone to listen or read it. As such, you need to practice good speaking and writing and make sure you get an audience. This requires a lot of things, chief amongst them a recognition that those are things you need to work on (please do shoot me if I ever write “transferrable skills)”. Luck is obviously a part of it; I have undeniably been helped by Russia invading Ukraine and a whole lot more.

For those of you thinking that this sounds like all work and no play, my final and sixth encouragement is for you: make sure to do all the other stuff in life. I started my PhD at the same pace I completed my MA, working 6-7 times a week and some late nights. After a few months, I just stopped and thought to myself:

This is how I’m going to live the next four years, the rest of my twenties, and it cannot go on.

I had realised it was such a long time ago since I read fiction, so I pulled out Tolstoy’s War and Peace from my shelf (still a favourite) and started reading. I didn’t stop there, I also realised that this is the time to lay a foundation for everything else that I found interesting in life. This included reading philosophy, studying history, learning languages, going to the opera and theatre, visiting all the bars and travelling. It is also an excellent time to venture to the other end of the excuse “if I only had the time and money”. I quit my apartment in London and could thus finance a month of field work and intensive Russian courses in Georgia.

So relax a bit, doing a PhD is also a great opportunity to broaden your mind and interests. Doing a PhD won’t get you wealthy, famous or happy. It really won’t. However, it will give you a good opportunity to dive into the subject that interests you the most for years. It will, nonetheless, be a demanding journey that, above all, will test your perseverance. I often say – only half-jokingly – that you do not need to be very clever to do a PhD, you just have to have a decent ability at arranging vast amounts of information and have a lot of persistence. Doing a PhD is actually the best antidote to authority-arguments that someone who has one is a genius, or at the very least, right. 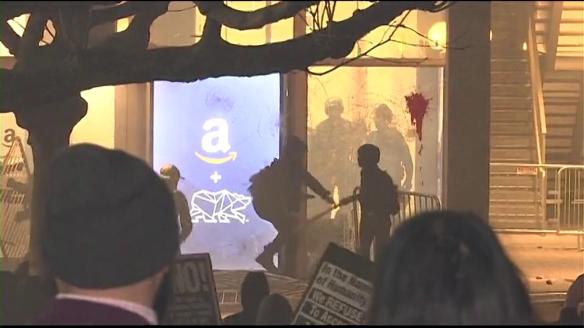 Our enemies have skilfully adapted to fighting wars in today’s media age, but for the most part we, our country, our government, has not adopted… For the most part, the U.S. Government still functions as a five and dime store in an eBay world. There’s never been a war fought in this environment before.

#Peskov: There is no doubt that Russia's adequate and mirror response will make Washington officials feel very uncomfortable as well

Ryan's statement is v interesting given how congress will be the center of gravity for Trump-Russia rapprochment. https://t.co/rFsI1fQAXA 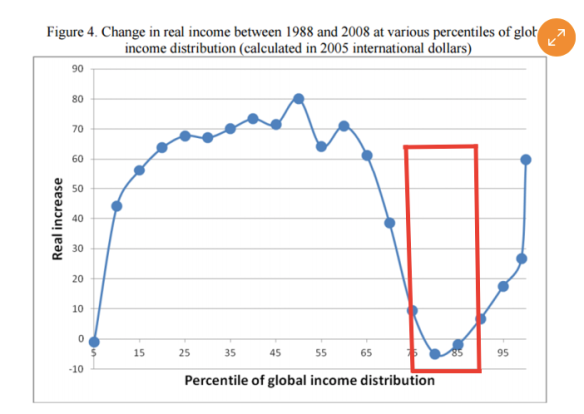 Erdogan says that Gulen was behind the coup attempt. They "received their instructions from their leaders in the US" https://t.co/13EwWNkHx1

#Turkey crazy video showing civilians taking over a tank and coup soldier firing shot against them in #Istanbul pic.twitter.com/9OkBGNqod0